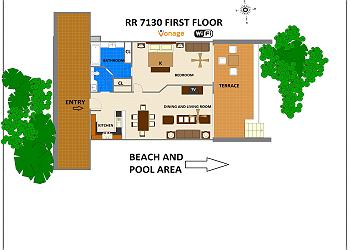 Building 3 - 7130 ONE BEDROOM UNIT: The Residencias Reef Condominiums in Cozumel are located right on San Francisco Beach, the most beautiful beach on Cozumel.
Just a 5 minute boat ride to some of the greatest reefs, it's perfect for beachcombers. There's also good snorkeling just off the beach.
And that beach stretches on for miles and miles so you can run or jog for as long and as far as you like.


SNORKEL AND DIVE BOAT PICKUP
All the Residencias Reef condos are fully air conditioned, have maid service, and access to 2 heated swimming pools one of which is a large freshwater infinity edge pool right on the beach.


THIS CONDO IS ON THE GROUND FLOOR FOR MAXIMUM CONVENIENCE TO THE BEACH, POOL, PLUS FREE LONG DISTANCE AND FREE INTERNET!

This unit also has an exercise bicycle!
The condos are located about 9 miles south of Cozumel's only town, San Miguel where you will find a virtual smorgasbord of wonderful shops and restaurants. Or try out the cook service
COOK SERVICE INFO