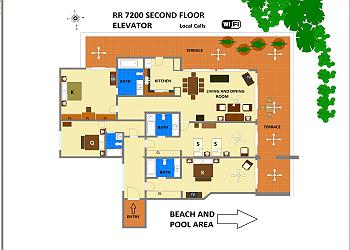 The Residencias Reef Condominiums on Cozumel are located right on San Francisco Beach, the most beautiful beach on Cozumel.
Just a 5 minute boat ride to some of the greatest reefs, it's perfect for beachcombers. There's also good snorkeling just off the beach. And that beach stretches on for miles and miles so you can run or jog for as long and as far as you like.

All the Residencias Reef condosare fully air conditioned, have maid service, and access to two large heated freshwater infinity edge pools. The 2nd swimming pool is directly in front of building three which is the building this unit is located in.
The condos are located about 9 miles south of Cozumel's only town, San Miguel.
This unit has a private patio. Easy access to the beach and either of the 2 swimming pools.
No deadline pressures here in this beautiful Residencias Reef condo. No phone service, but there is high speed Internet service, so if you are traveling with a laptop you can stay in touch with family or business by email or even Skype... if you happen to have that on your computer. Nothing unexpected here except a great big beautiful sunset.